At the Oriental Hotel Bangkok

Try to imagine a simple Thai Chinese girl who—from humble background, still in her teens, painfully shy and inexperienced when she began—would in three decades play hostess to the world’s rich and famous, noted writers, politicians, heads-of-state, prince and princess, kings and queens, sultans and maharajas—and anybody who was anyone.

Sooner or later they all came to the Oriental Hotel in Bangkok and Pornsri was there to meet and befriend them, and often become their confidants.

For 29 years Pornsri Luphaiboon was PR Director of the Oriental Hotel—mostly before it became Mandarin-Oriental—and this is her story in photographs, and re-told by Southeast Asia’s best known ex-pat writer, Harold Stephens.

As a writer for the Bangkok Post, Stephens met many stars and celebrities, and he adds his comments to the book. 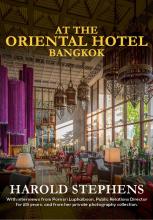