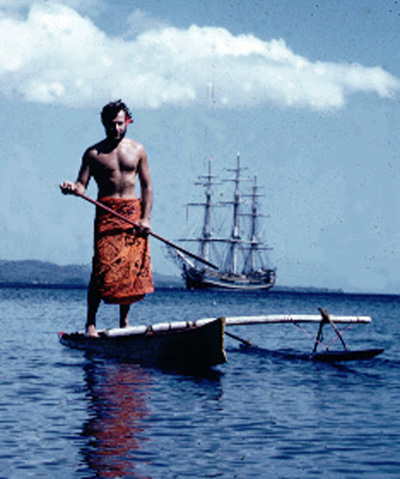 Writer and author Harold Stephens takes the road less traveled in exotic foreign lands. He is one person who has lived his dream of exploring the world's most remote corners -- in search of adventure for adventure's sake, experiencing life on his own terms, and writing about it. This wonderful writer shares his exciting experiences with his readers in more than two-dozen travel and adventure books, novels, biographies and in other media as television and video scripts. This includes an historical 10-hour TV script on King Narai of Siam.

A dedicated writer of thousands of travel articles as well as an explorer and adventurer, Harold Stephens traveled deep into Bhutan, motored across Tibet, and followed along the Great Wall of China in a Jeep, and rafted down the Amazon. He trained with a Sir Edmund Hillary team in New Zealand and climbed the Matterhorn in Switzerland and Popocatapetl in Mexico.

In the mid-sixties, Stephens motored around the world by Jeep for a record-breaking 42,252 miles, through monsoon rains and across blazing deserts, over nearly impassable roads through hostile countries with hostile and sometimes uncivilized people, facing untold dangers, disease and hunger. Along the way, he met some very remarkable people and found romance and love in the strangest places.

His great love for the sea inspired Stephens to build his own schooner, Third Sea, which he sailed throughout the South Pacific and Asian waters, and up many wild rivers of Southeast Asia. The famous, and infamous as well, sailed aboard with him and shared his yachting adventures, and more than once encountered raging typhoons and marauding pirates. Third Sea's last voyage was disastrous and terrifying as she smashed against the rocks in a devastating hurricane that ravaged the Hawaiian Islands.

While deep-sea diving, Stephens found ancient Chinese wrecks in the South China Seas and continued his wild and revealing searches for World War II wrecks on lonely Pacific Islands. He located and dove on the Battleship HMS Repulse, sunk by Japanese dive bombers the day after the attack on Pearl Harbor.

Stephens searched for the pleasure of searching, whether it was for Bigfoot in Southeast Asia, lost cities, or for the elusive wild rhino in the Malay jungles. Stephens has lived with Negritos in the Malay jungles and with hill tribe people in northern Thailand. On the empty Australian Outback, he encountered uncertain Aborigines still living in the Stone Age, and survived by eating kangaroo meat.

Stephens was raised on a farm in western Pennsylvania, and when a fire took away their house, at the age of 15 he went to work in the coal mines and later the steel mills of Pennsylvania. Shortly before his 17th birthday he enlisted in the Marines and four months later found himself in the Battle of Okinawa. The war over, he went to China as a China Marine, was held by the Red Guard and escaped by swimming out to a junk at sea. Back home, rather than return to the steel mills, he re-enlisted, and was sent to Paris as one of the first US Embassy security guards. Once there, he was chosen by Ambassador Jefferson Caffery to become his aid, an event that changed his life forever. Inspired by the Ambassador to get an education, he took his discharge in Washington, D.C., and entered Georgetown University School of Foreign Service. He graduated, joined the National Security Agency, but after two years came to the conclusion that government service was no better than working in steel mills. He decided to devote himself to writing, something he always wanted to do, and has never looked back since.

For the past forty years, Southeast Asia -- mainly Bangkok where he is a feature writer for the Bangkok Post and travel correspondent for Thai Airways International -- has been home to Harold Stephens--that is when he is not exploring a remote island, a newly discovered ancient ruin, or scouting locations for a movie.

From the Introduction to At Home in Asia

As a foreign correspondent, my job involves the usual small wars, upheavals and workaday mayhem. Every so often, however, the mail includes a pleasant surprise which takes me away from the boring routine: a letter from Harold Stephens, filled with some real excitement.

You can spot Steve's letters from across the room: The address is written in urgent printed characters, with the no-nonsense, slightly-askew strokes of a man who has struck gold and is racing to catch the last burro to Eureka. The envelope seems to twitch and quiver from all the energy within.

I remember one which reached me in Singapore, full of the usual chatty news: "Chased by crocodiles ...", "capsized off Tioman ...," pirates nearly got us near the Celebes ..." At the end, when he added, "Wish you were here," I thought, "Me too!"

What always struck me was the tone of the letters. Always humble, courtly, full of derring-do but absent of bravado. But this was only to be expected. Adventure is Harold Stephens' natural state. To boast of his exploits would be like bragging about breathing.

A product of long nights with Conrad on a Western Pennsylvania farm, he grew up with a code of honor and a sense of ingenious wonder. He is burly and broad-shouldered -- in "Mutiny on the Bounty," he doubled for Marlon Brando when the action got tense -- but his buckles don't swash. Handsome, with eyes that, in fact, twinkle, he is no ladykiller. His code, in that regard, is more Sir Walter than Errol Flynn.

Steve can give you Lord Jim by heart: "He saw himself saving people from sinking ships ... Cutting away masts in a hurricane, swimming through surf with a line, or as a lonely castaway, barefoot and half-naked, walking on uncovered reefs in search of shellfish to stave off starvation." He can tell you about every one of Maugham's rubber planters and district offices.

He is always after something that eludes normal men. If someone tells him a prehistoric, enigmatic Big Kneecap is running loose in the Burmese backcountry, he'll be off before the informant finishes his sentence. If he hears of an ancient Greek olive oil convoy lost in the Mariana Trench, he'll head out with snorkel and swim fins. But unlike quixotic amateurs, Steve will most likely bring back the kneecap and the olive pits.

One day Steve announced to friends that he would build a vessel to take him on his odysseys to forgotten archipelagos and against currents that others avoided as a bad idea. It would be made of cement. "Of course," we thought. Months later we were spending our weekends slapping concrete across a transom.

Steve's Third Sea must have done a million miles, its low-slung pirate-brown schooner hull crashing against the reefs in every lost corner of the Southern hemisphere. He racked up adventures even he hadn't dreamed of, from the nastiest straights of the Philippines to Cook's favorite waters across the Pacific.

One day, in another of these letters, the news was bad. The Third Sea was blown onto the rocks off Hawaii in a hurricane. Even Lord Jim couldn't save her. it must have been a hell of a blow. If there ever was a time for a little self-pity, this was it. Not a trace of it. Steve had lost one love of his life, but he had others.

Once I tried to write a book about Steve. But who would believe it? Anyway, he writes his own books, and they're good ones. But my notes spill out of a large crate. Steve lied about his age to join the Marines so he could fight in the Pacific. He exaggerated his language skills so he could be a translator in China. Imprisoned by the Chinese communists, he escaped and swam out to a passing junk. He rode a motorcycle across Australia, a jeep across Russia, and -- was it a pogostick, across the Arctic?

Once Steve was married to a woman of Philadelphia high society, with a respectable job in naval intelligence. The marriage ended. That was when he went to Tahiti. One ranking government official invited Steve home to a family dinner and sat him down to watch a TV series called, "Adventures in Paradise," to explain the ridiculous Hollywood romanticizing of a dull reality. Soon afterward, Steve was in the cast of the series. And in paradise.

But even more than he amasses adventures, Steve collects characters. He is drawn to people who distinguish themselves from the chairs they sit in. And anyone in that category is drawn to him. With a writer's skill and a friend's warmth, Steve describes the remarkable lives of the people who populate his world.