Commemorating Harold Stephens' thirty years as a writer for the Bangkok Post, the newspaper chose 36 of the authors travel and adventures stories and published them by Post Books in this 303-page volume. Stories come from the author's vast experiences, from outfitting and sailing his own schooner around Asia, waters and the South Pacific, from scouring the highest mountain peaks, trekking the deepest jungles, exploring the most dangerous deep in Asian waters, and other related adventures. Stephens gives the readers a vivid idea of how it was to travel off the beaten path.

I will always remember the morning over 20 years ago when Harold Stephens stopped by at my desk at the Bangkok Post while I was Features Editor in the early 1970s to ask if we would be interested in publishing an article about a schooner he was having outfitted here in Bangkok in our Sunday section, then called the Sunday Extra.

In a most unassuming way, he went on to describe how the ferro-cement hull of the schooner had been cast in Singapore, and how he had motored it to a boatyard in Phra Pradaeng, and he thought that this might make a good feature story.

This was my first meeting with Steve, as I later learned to call him. In Bangkok, one hears a lot of "travellers' tales," but here was a writer who was building and outfitting his own yacht and he had photographs to back this up. He also casually mentioned the possibility of the Bangkok Post being interested in other travel stories: several of which you will read in these pages.

As you can see from this book, I was most happy to publish these highly-readable and observant accounts of Steve's exploits in Russia, China, and indeed throughout Asia and the south and southwestern Pacific

For Steve was indeed a writer after my own heart.

There was I, tethered to my desk with deadlines looming daily, while he was preparing to sail the world; and as I would quickly learn, Steve then had almost 30 years of tramping the jungles and sailing the high seas, while closely observing the arts, customs and cultures he encountered already behind him.

Harold Stephens is the first to admit that his wanderlust was kindled by reading novels by Joseph Conrad, Somerset Maugham and Rudyard Kipling, and I am certain that the power of the prose of a good travel and adventure writer is capable of inspiring others to follow in their footsteps.

I had also read many of the same books in my youth, and other books like this one you are about to read that described life in distant and colourful lands - distant from my damp and usually dismal native England, that is.

I believe that this compendium of short stories, in similar way, should broaden the horizons of every reader, and stimulate others to share in some of the experiences that the author describes in this book.

For this is more than a book about travel in Asia, and more than collection of tales of adventure; it is a wealth of candid observations about different customs and cultures from the pen of Harold Stephens the Philosopher.

And while some of the chapters offer practical advice on what to do when in a certain city, be it a particular bar to visit, a hotel to stay in or describing the ascent of Mount Kinabalu, other chapters provide powerful insights about the importance of recognizing and appreciating different cultures.

This is in addition to vividly describing them in the context of friends who live there. Friends such as renowned artists Theo Meier and Han Snel who made their homes in Bali, or Khun Pornsri Luhphaiboon, when she was public relations officer of the Oriental Hotel.

There is also the wisdom in these pages that comes with having been a quiet but tenacious adventurer for almost 50 years, which all began when Steve exaggerated his age in order to be able to join the Marines so that he could fight in the Pacific, which ended up with the writer in China at the end of World War II. However, I'll let him share his experiences about China "then and now" with you as he recounts them in this book.

In addition the writer's perceptions and often amusing anecdotes, these articles present an excellent historical perspective, conveying how different it might have been to have travelled in Asia just 100 years ago, as well as vividly bringing alive the World War II battles for Corregidor in the Philippines as well as how life in South India might have been in the 17th Century in a Danish Settlement.

For anyone who travels to Asia, this collection of stories should enrich their experience by conveying a greater awareness of many places that the author describes, often in fine detail.

Suffice to say, I did get my touch of adventure with Steve.

I took up an offer he had made to pitch in and help out on my days off, sanding down the deck of his schooner, to be named the Third Sea, while it was being outfitted in Phra Pradaeng, and I was aboard for the maiden voyage up the Chao Phraya and later under full sail to Pattaya.

A few days later we sailed down to Koh Samui, where reluctantly I had to wave Steve goodbye after he had rowed me ashore: he was to sail for distant ports and islands, but for me it would be the overnight train back to Bangkok and more deadlines.

But, as Steve told me the other day, true adventure still lurks in this day and age in Asia, and he explained that he had just returned from a trip to the far north of Burma where the local tribes people had never seen a White person before.

The best part of Steve's exploits is that the author shares his experiences with a wide audience, as you will find in these pages. Might I suggest that you let your imagination be your guide for a true adventure might be as close to Bangkok as Samut Prakarn, the fishing port to the south of the city on the mouth of the Chao Phraya River, as the writer points out, were you to pay your way to travel on a fishing trawler for a few days at sea in the Gulf of Thailand.

This is more than a book about travel in Asia, and more than a collection of tales of adventure. It is a wealth of candid observations about different customs and cultures from the pen of Harold Stephens the Philosopher. 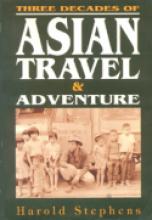